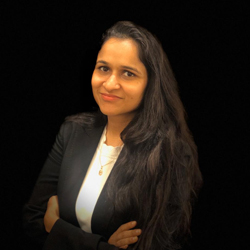 Neha Mehta has been a practicing Advocate of the Bombay High Court for over 13 years and has attended to a wide variety of complex litigation related to commercial real estate transactions, arbitration relating to commercial and contractual disputes at both domestic and international level, white collar crimes, banking and finance, insolvency and bankruptcy, direct and indirect taxation, company restructuring and labour disputes. Her vast knowledge of dispute resolution has enabled her to successfully advise clients on formulating strategies in High Courts, National Tribunals and the Supreme Court of India.

Neha’s expeience in the field of litigation and private client practice includes asset tracing of indian assets for international corporates, family business restructuring and efficient estate planning. Prior to joining the firm, she was an independent counsel of the Bombay High Court. Neha has also been appointed as a Senior Counsel by the Government of India to represent the Central Board of Excise and Customs in indirect tax litigation in the Bombay High Court.
Neha has also spoken at several conferences, including a seminar held by the Goa Chamber of Commerce & Industry on ‘Estate Planning’.

2007 – Bachelor of Laws, University of Calcutta