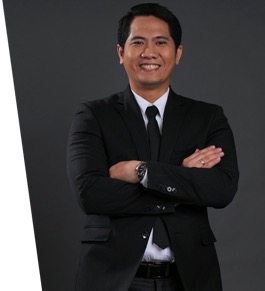 Melchor Jaemond Aranas is the firm’s managing partner and corporate legal consultant. He specializes in the field of business and corporate law such as, but not limited to, incorporations, licensing of foreign corporations and multinational companies, mergers and acquisitions, applications for increase and decrease of authorized capital and other SEC applications and issues.

Melchor was a senior securities lawyer at the Securities and Exchange Commission for more than half a decade. As such, he has extensive experience in overseeing whether corporations are compliant with the provisions of the Corporation Code and SEC rules and regulations. He handled and reviewed applications for incorporations, amendments, increase or decrease in authorized capital stock, and mergers. He also became part of and helped pioneered the Licensing Unit – a team dedicated in processing secondary licenses of foreign corporations, multinational companies, capital market participants, and financial institutions. In addition, he acted as hearing officer to a wide variety of SEC administrative cases. Melchor is also a dual-licensed lawyer. He was admitted to practice law in the State of New York in 2015, and a member of the New York State Bar Association.

Lastly, Melchor is a member of the academe and a law professor at Pamantasan ng Lungsod ng Maynila (“University of the City of Manila”) – recognized as one of the top law schools in the country. He teaches business law, particularly Corporate Law and the Law on Partnerships, Agency and Trusts, in PLM College of Law.